The Shocking, Subversive Origins of SantaCon

Alcohol Again Banned on NY Trains in Anticipation of SantaCon, Distancing the Debaucherous Event From Its Roots as Charity Activism 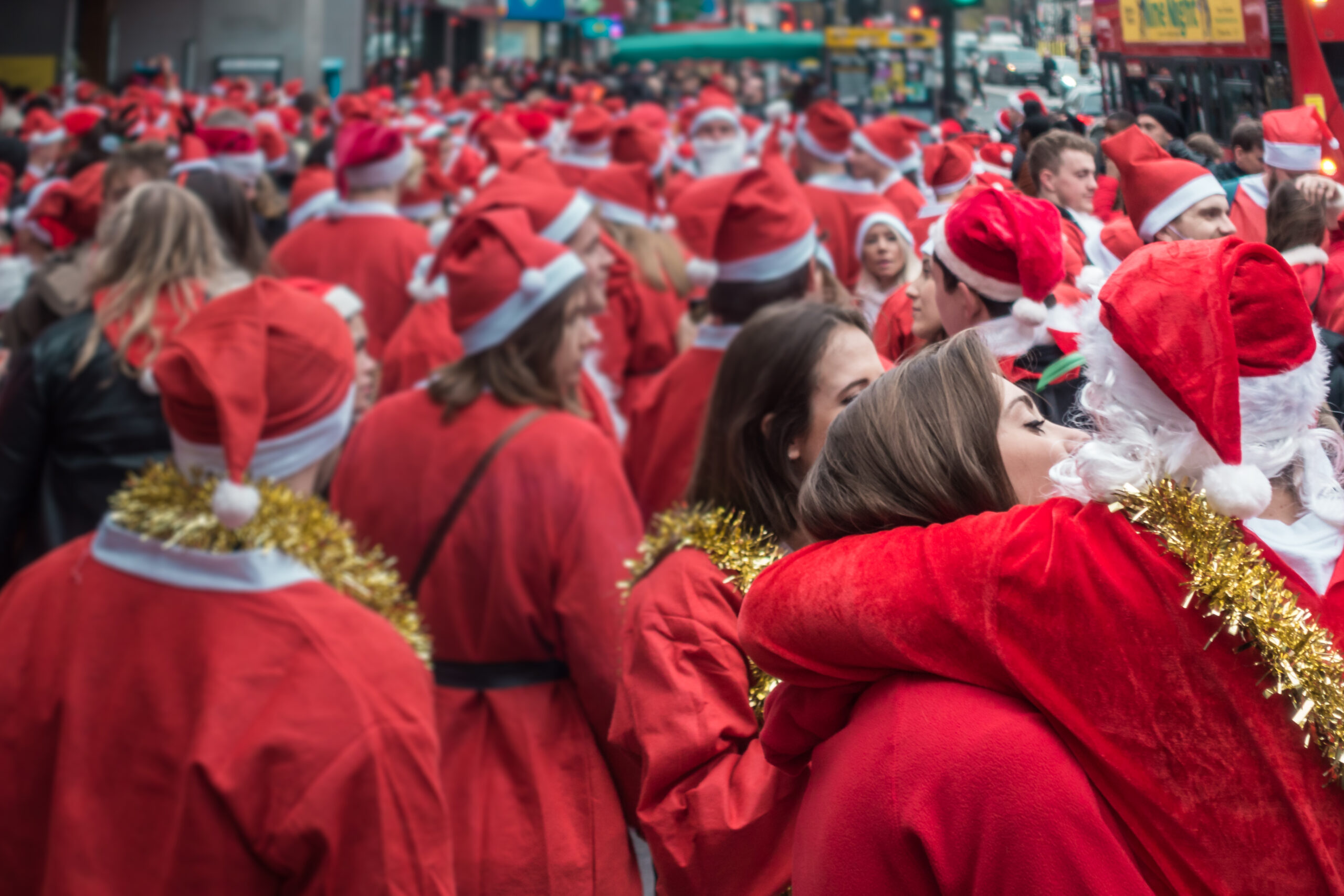 Believe it or not, SantaCon began life as a Danish counter-culture protest in the 1970s. Photo: Shutterstock/Pav-Pro Photography Ltd

Another year, another SantaCon. But what if we told you it hasn’t always been this way?

The infamous event, which falls on the second or third Saturday of December, regularly sees tens of thousands of inebriated Santas swarm the bars and streets of major cities across the United States.

In an attempt to quell the debauchery, the New York MTA has announced that it will once again be banning alcohol on all Metro-North and Long Island Railroad trains for a 32-hour period over the weekend.

NYC SantaCon, arguably the biggest and best-known in the country, regularly sees as many as 30,000 attendees flood the streets of Manhattan.

Depending on your patience for drunken Christmas antics, you probably fall into one of two camps; you’ll either be out and about, dressed as Santa Claus while you shotgun beers and sing Jingle Bells, or you’ll be sitting at home hearing the revelry through your window, dreading the borderline post-apocalyptic landscape that’ll await the city come Sunday morning.

But the SantaCon we know and “love” today is a recent phenomenon, one which has strayed far from its roots as an anti-consumerist protest movement begun by a Danish activist theatre group in the 1970s.

Yes, you heard that right.

The first American SantaCon was conceived in San Francisco in 1994 as a political statement. Its organizers were inspired by a similar event that had been staged in Copenhagen 20 years earlier, when activist theatre group Slovognen handed out stolen goods from the shelves of a department store as “presents.”

This progenitor to SantaCon, which was intended as a critique of holiday consumerism, ended when all its participants got arrested.

Counter-culture activist group the Cacophony Society read about the event and had a flash of inspiration. The Cacophony Society had itself been born from the so-called “Suicide Club,” a daredevil secret society that encouraged dissent through the likes of infiltrating and exposing the California Nazi Party.

The Cacophony Society was content to keep their activities a little less dangerous. In 1994, thirty-eight participants dressed in santa suits and took to the streets of San Francisco, getting into a snowball fight at a skating rink and attending a debutante ball at a unionized strip club called the Lusty Lady. 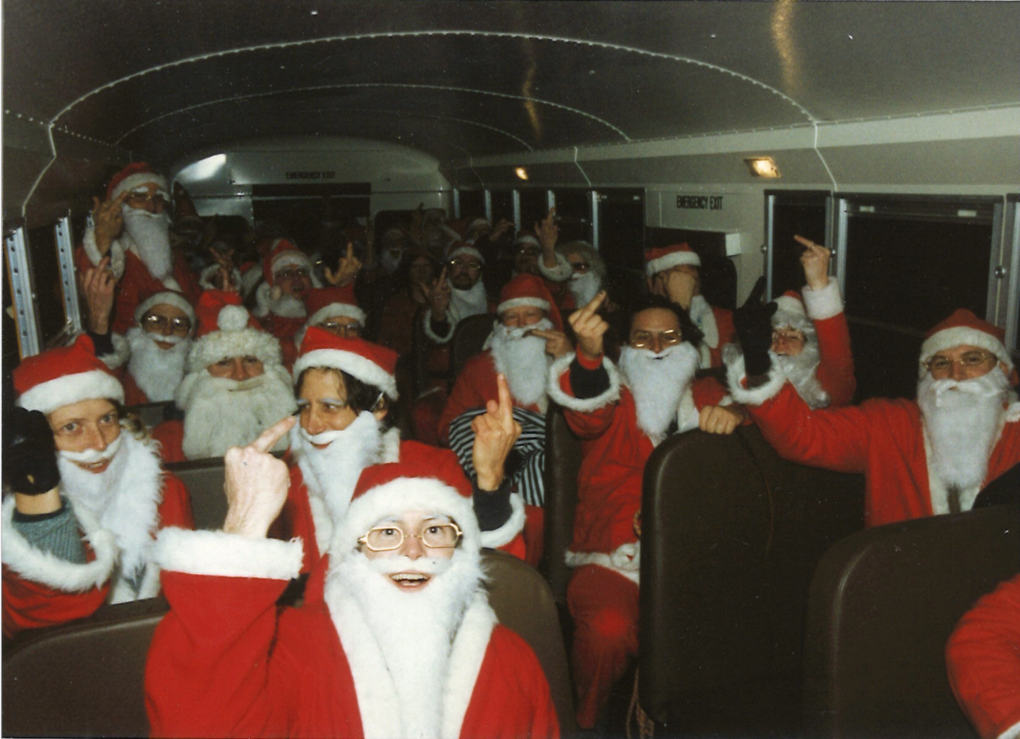 John Law, one of the co-founders of Burning Man, was in attendance. Declaring modern American Christmas as the epitome of “middle-class hypocrisy,” he had his friends mock-hang him from scaffolding in the middle of a crowded city street. Underneath his Santa suit, he was wearing a body harness. 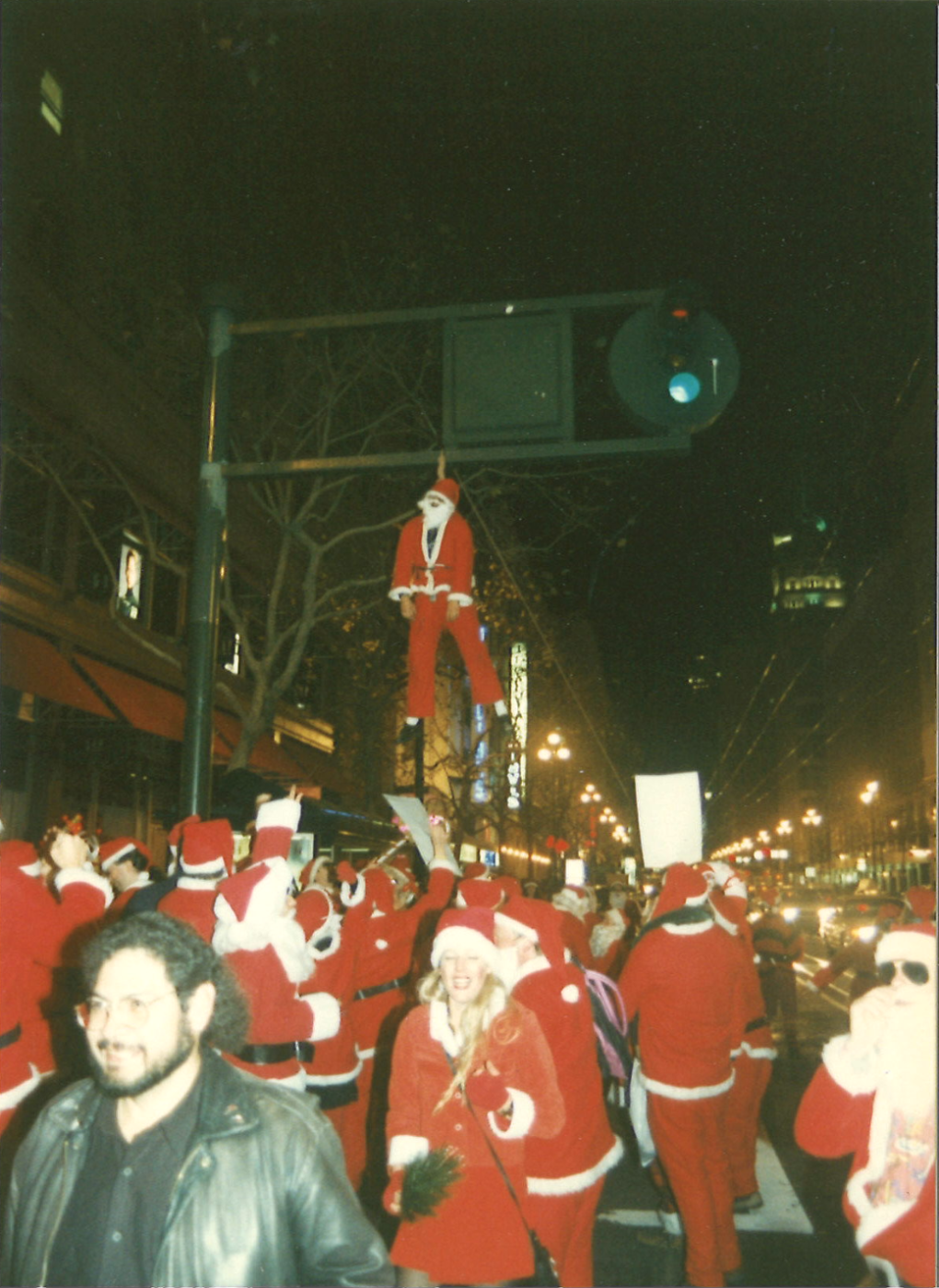 It inspired a similar event in Portland in 1996, then another in Seattle in 1997.

As more and more revelers flocked to the festivities, the event gradually became less about subversive activism and more about generalized drunken antics.

Flash forward to today, when you’re more likely than not to see fraternity brothers dressed varyingly as Santas, elves and reindeer, playing beer pong in the middle of the street while they blast Post Malone from the back of a Jeep.

It’s difficult to understand how an anti-consumerist protest held in Copenhagen nearly 50 years ago spiraled into today’s news of alcohol being banned from New York City trains, yet here we are.

As unlikely as it is that we’ll see SantaCon return to its roots as Cheap Suits Santa, it would surely be a welcome change of pace.