Travel Log: The Agave Fields and Distillery of Jose Cuervo

Travel Log: A Trip Through the Vast Agave Fields and Historic Distillery of Jose Cuervo 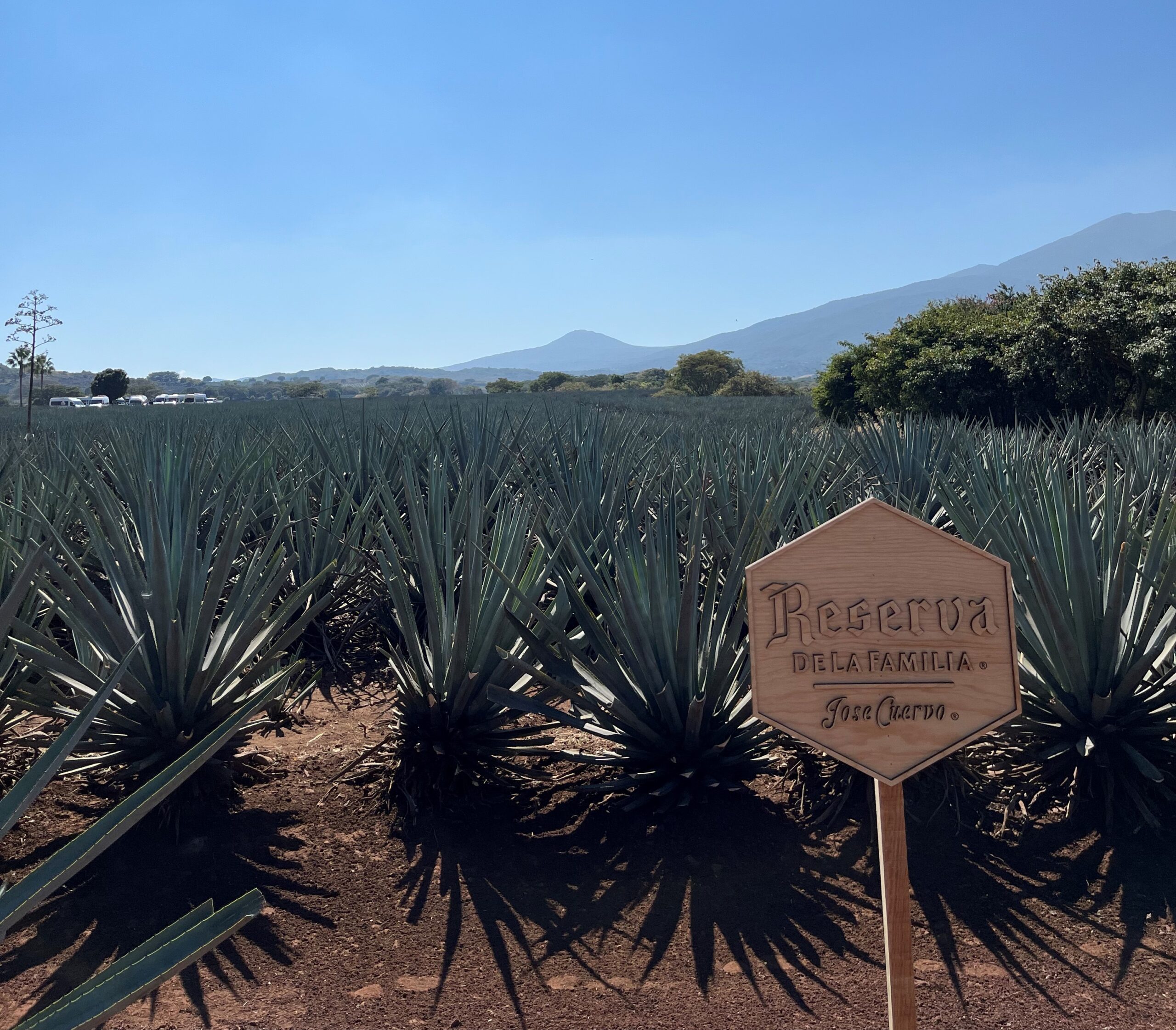 I recently had the pleasure of visiting Tequila’s eponymous hometown in Jalisco, Mexico, a relatively small town of around 40,000 perched underneath the towering Volcano de Tequila, which, thankfully for spirits lovers worldwide, hasn’t erupted in over 200,000 years.

This is where tequila was first invented in the 16th century, originally conceived as a distilled evolution of the millennia-old indigenous agave drink pulque. In the many years since, Tequila has established itself as a world heritage site, tourist destination and business monolith, home to over 90% of the world’s tequila production. 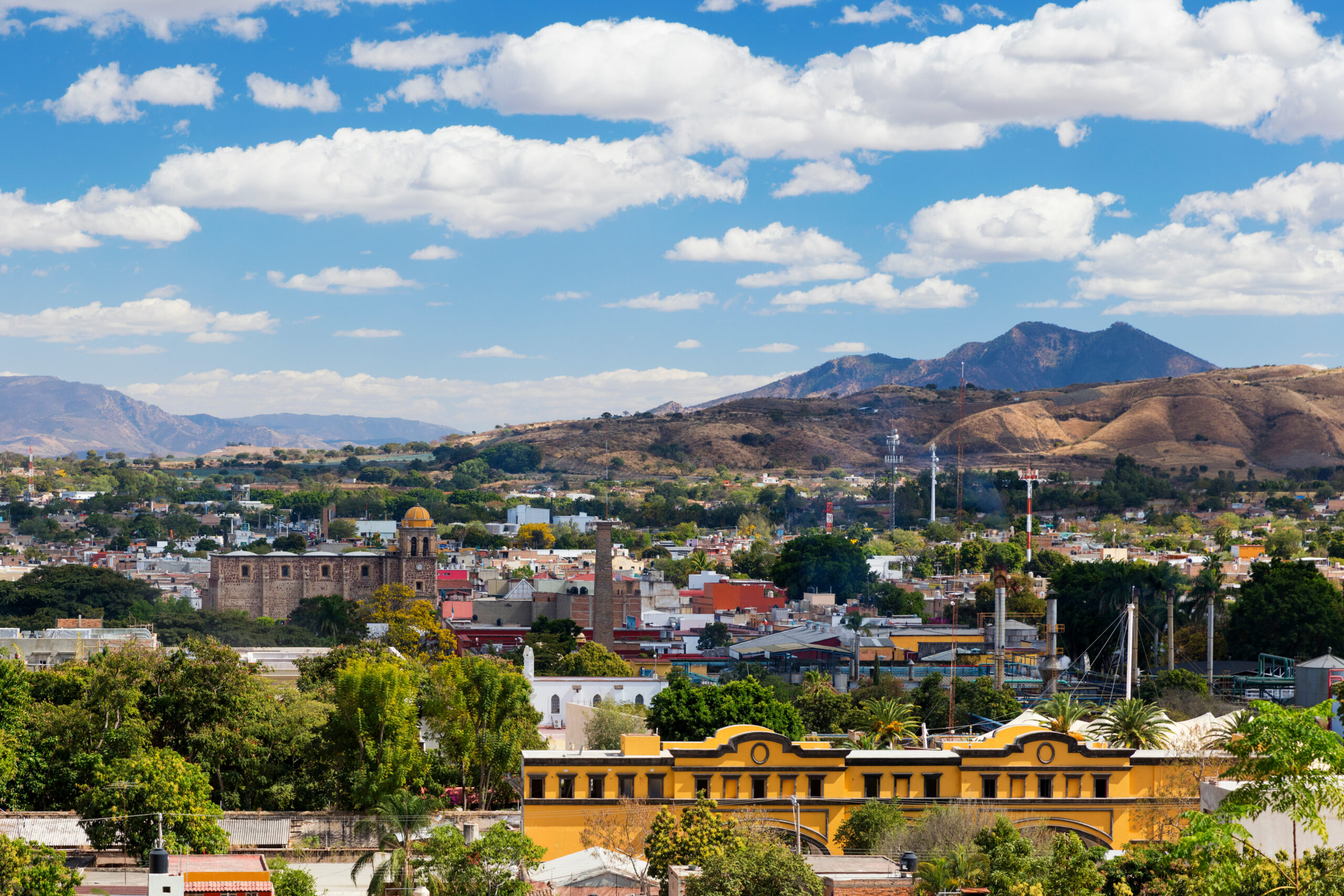 The town of Tequila. Photo: Shutterstock/zstock

From virtually any spot in the town, your eyes can roll over rows upon rows of thousands, if not millions of blue weber agave plants stretched to the horizon.

We came to Tequila at the invitation of Jose Cuervo, who wanted to show us their vast agave fields in the Jalisco lowlands and take us on a tour of La Rojeña, the oldest distillery in Latin America.

Not only do they lay claim to the oldest distillery, but Cuervo is also credited with creating the first-ever aged tequila. They also legislated for and popularized mixto tequila, 51% blue agave distillate spirits that have taken ahold of drunken college antics around the globe.

Arguably, these are the two largest innovations that helped launch tequila’s still-ballooning popularity in the United States. Their success has handily established Cuervo as the world’s single biggest tequila producer.

On our ride to the periphery of town, brand names like Jose Cuervo, Sauza and El Tequileno could be seen plastered everywhere from billboards to hole-in-the-wall convenience stores. Riding the streets beside us were a cartoonish variety of bizarrely shaped tour buses, modeled in the likes of giant tequila bottles, barrels, and even jalapeños. Much to my chagrin, we were just riding in a regular, van-shaped van. 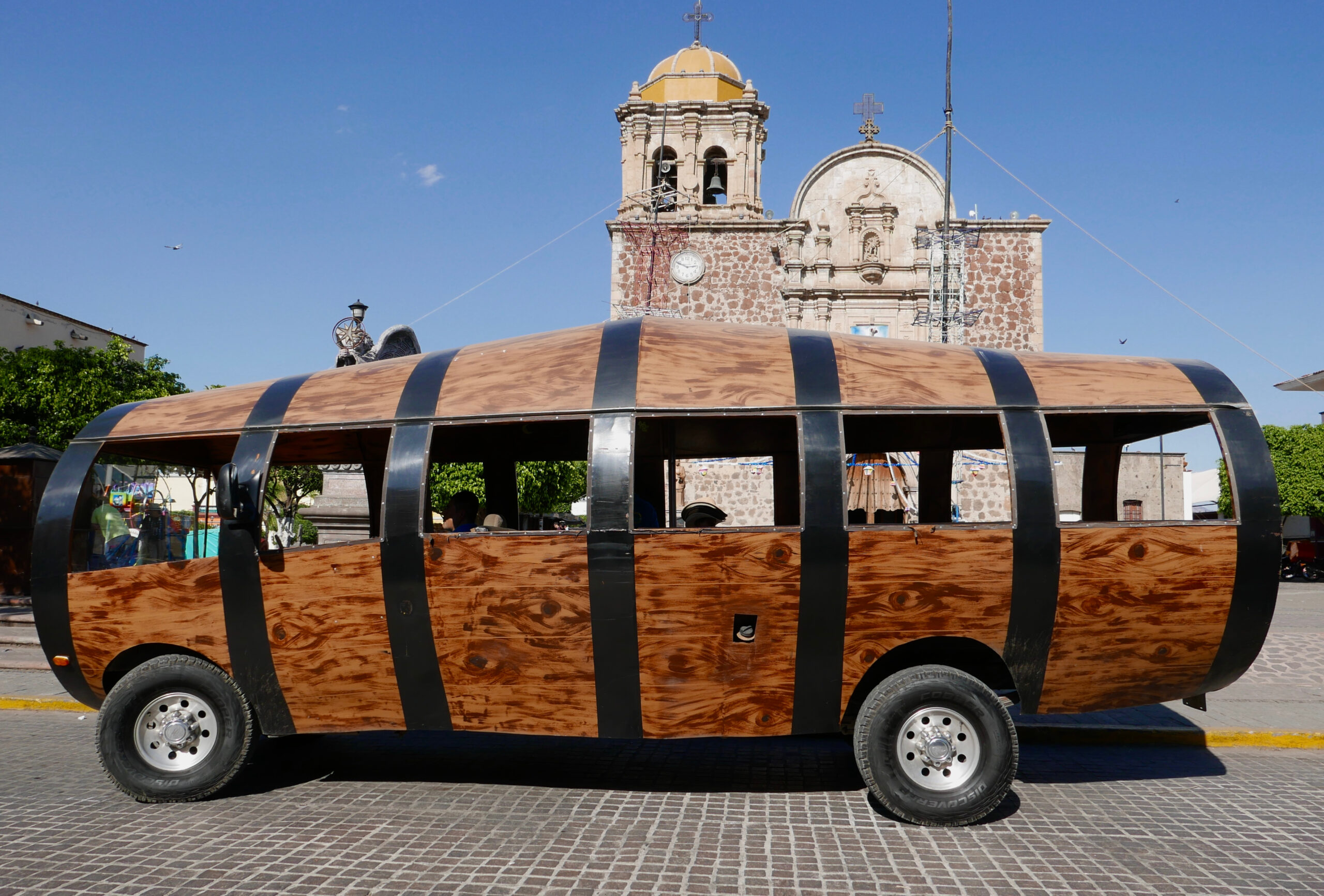 A ride to the fields is defined first and foremost by the sight of endless agave plants in every direction.

But if you pause and look a little closer, you’ll begin to notice that the iconography of agave is literally everywhere; lanky leaves emblazoned on the edges of street signs and giant piñas perched atop lamp posts. This is a place where even the water gutters are inconspicuously made to look like rows of agave. 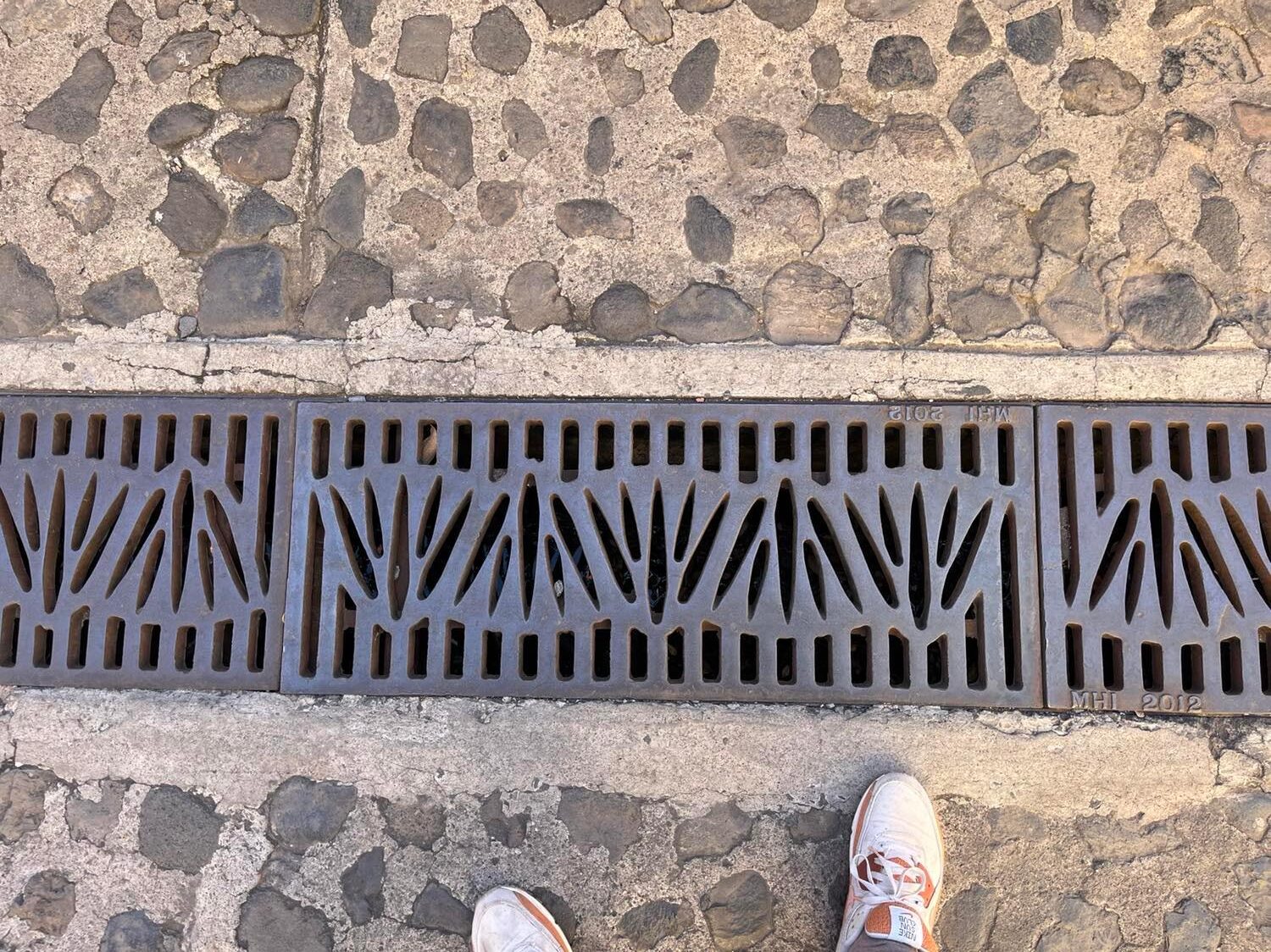 As we pulled into an open pavilion set up in the middle of a field, we were greeted by the sounds of music and the sight of dozens of visitors milling about in identical white hats.

These were the Reserva de la Familia fields, agave destined to be used in Jose Cuervo’s high-end line of tequilas. Many had made the trip to Tequila for an unveiling event scheduled the next night that was going to show off a new Reserva Extra Añejo artist-designed box. I donned a hat and joined the crowd. 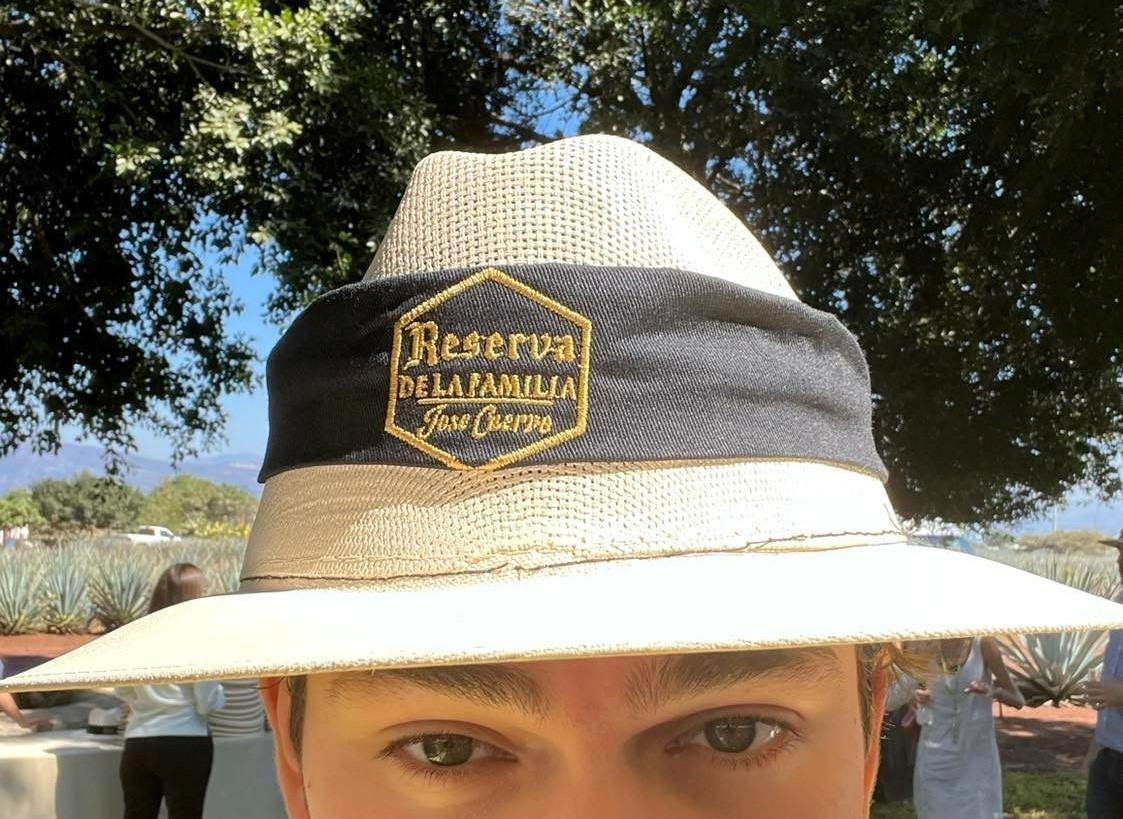 Me and my hat.

On the edges of the hubbub stood a line of stoic jimadores wearing pristine white shirts, matching black pants and wide-set caballero hats.

Within tequila folklore, jimadores are the artisans on the front lines of the fields, ones who can identify perfectly ripe agave and trim them to their cores in a matter of seconds. Each jimador was holding a coa de jima, a large flat-bladed tool that can thwack an agave to pieces in the right hands.

We were beckoned over to a jimador, Antonio, who gave us a hands-on demonstration of how quickly a full-grown agave could be reduced to a pile of mulch. On average, Antonio said that he can trim several hundred agave piñas per day.

We were invited to taste tiny chunks of agave that had been carved out from the middle of this once towering plant. They looked and tasted like bits of raw coconut, far from the elaborate processing that would eventually turn them into a boozy spirit.

At this point, I was even invited to plant a mini-agave myself. During cultivation, farmers replant tiny clonal shoots that grow beneath mature agave plants, a quick and easy process that allows for an endless replication of these vast fields.

Quick and easy aside, I floundered around with a shockingly heavy tool, struggling to carve even the tiniest of holes for my agave shoot. After a time, Antonio stepped in and showed me how it was done. At the very least, he seemed humored by my half-hearted attempt. 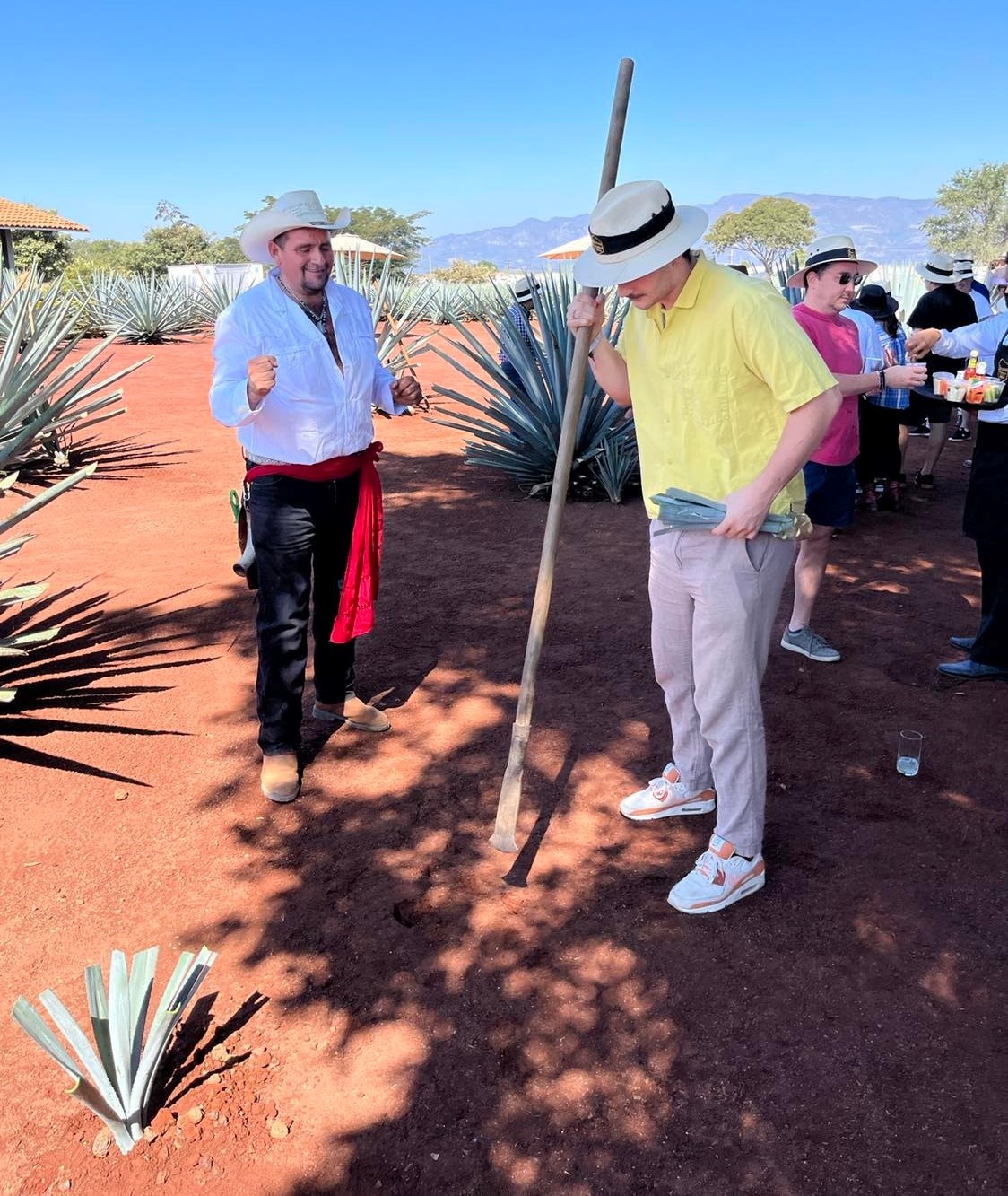 I promise, no one was laughing at me.

Agave firmly planted, we ventured on to the next step in the production process; La Rojeña distillery.

Much to my surprise, the oldest distillery in Latin America was located not within one of these fields, but smack dab in the middle of the town of Tequila. Right off the town square in fact.

Built in 1812, La Rojeña is certainly not Jose Cuervo’s only distillery, but it’s definitely the one most steeped in history. For visitors, the facility allows an inside look at every step in the production process from agave to tequila.

Walking into the heart of the processing plant, we passed all manner of monuments to Jose Cuervo’s history. Paintings depicting the origins of agave farming, statues of tequileros and tequileras in the field, and even a fleet of perfectly preserved, antique Jose Cuervo cars. I did a quick double-take on that last one. 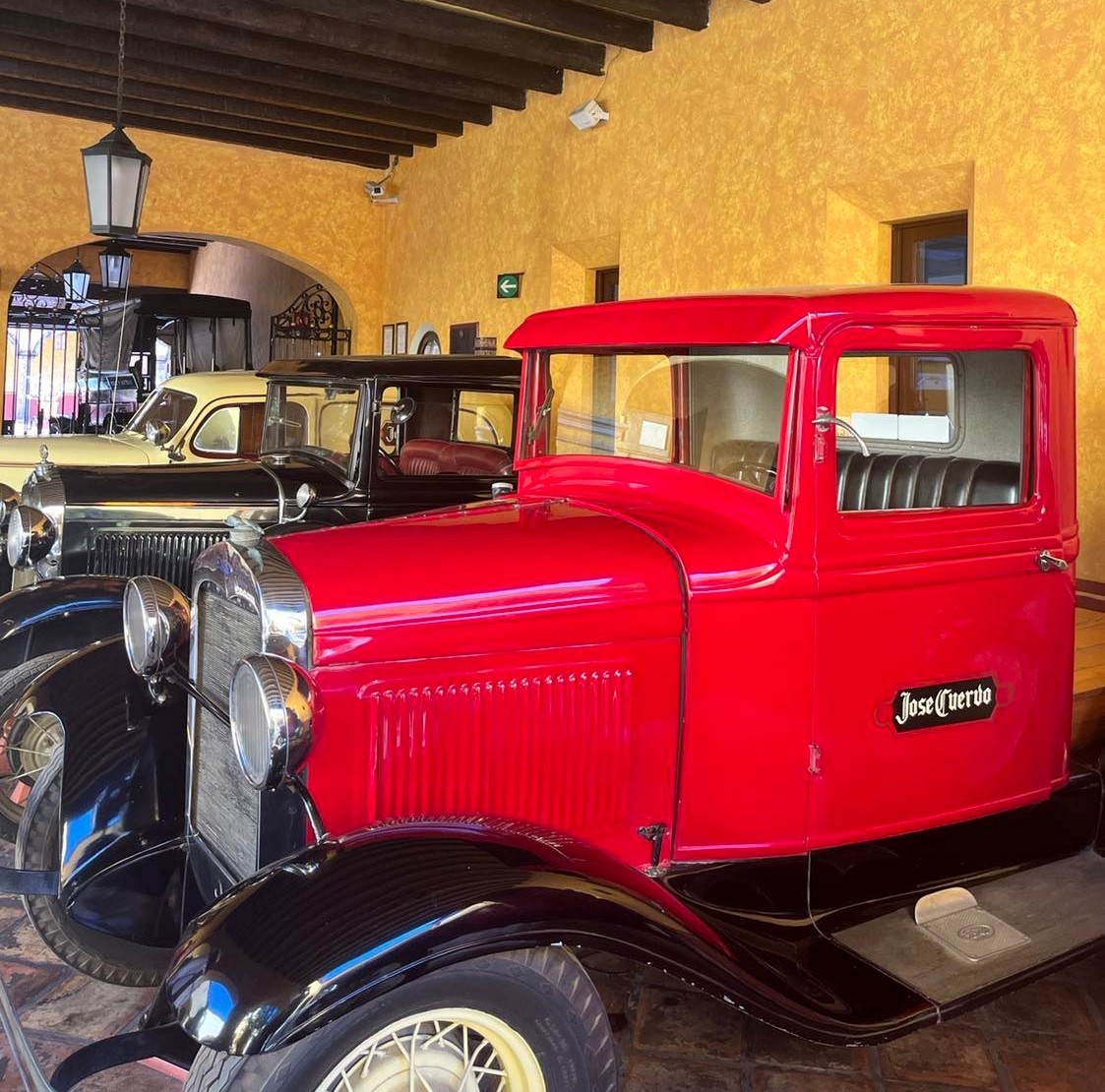 Rounding a corner we stumbled upon giant piles of trimmed agave piñas strewn across the ground. A team of around a dozen workers split the piñas in two and carried the halves over to giant metal doors carved into the wall.

These were the ovens, known as hornos, in which agave is roasted for around 24 to 48 hours. During that time, agave is turned from the bright white coconut-adjacent chunks that I had eaten an hour earlier into soft, orangish slivers bearing the taste of burnt sugar and the funky aroma of cooked agave. It was a smell you could whiff not only within the distillery, but all over town at any time of day. 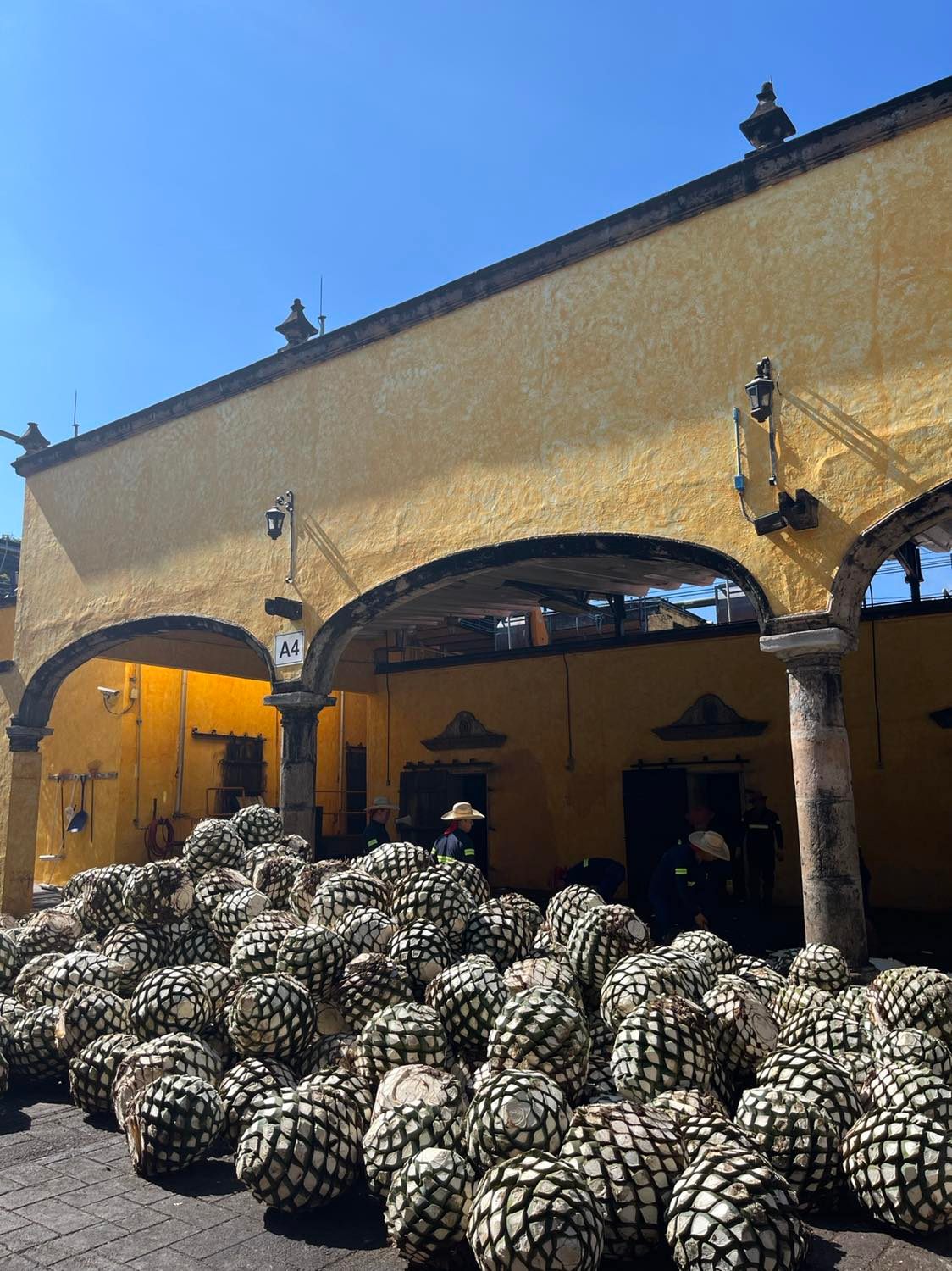 Next, we were led inside to the grinding gears and the bubbling stills of the facility.

The roasted agave piñas were chucked out of ovens onto conveyer belts where they were pulverized into a pulpy heap. We passed towering metal distillation stills and entered a room stacked with hundreds of barrels containing reposados and añejos in the making. 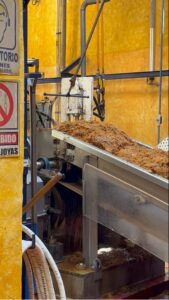 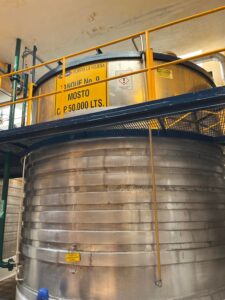 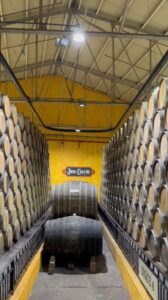 To my surprise, there was one last stop that the Cuervo team wanted us to make.

We descended a stone staircase into a dimly lit basement, where a man dressed in a black suit wore a cuerno (a carved bull horn traditionally used to drink tequila) dangling from his necklace.

This man of few words was Don Francisco Hajnal Alfaro, the maestro tequilero at Jose Cuervo. He motioned to a gargantuan bottle of Extra Añejo in front of him and explained the origins of the spirit. 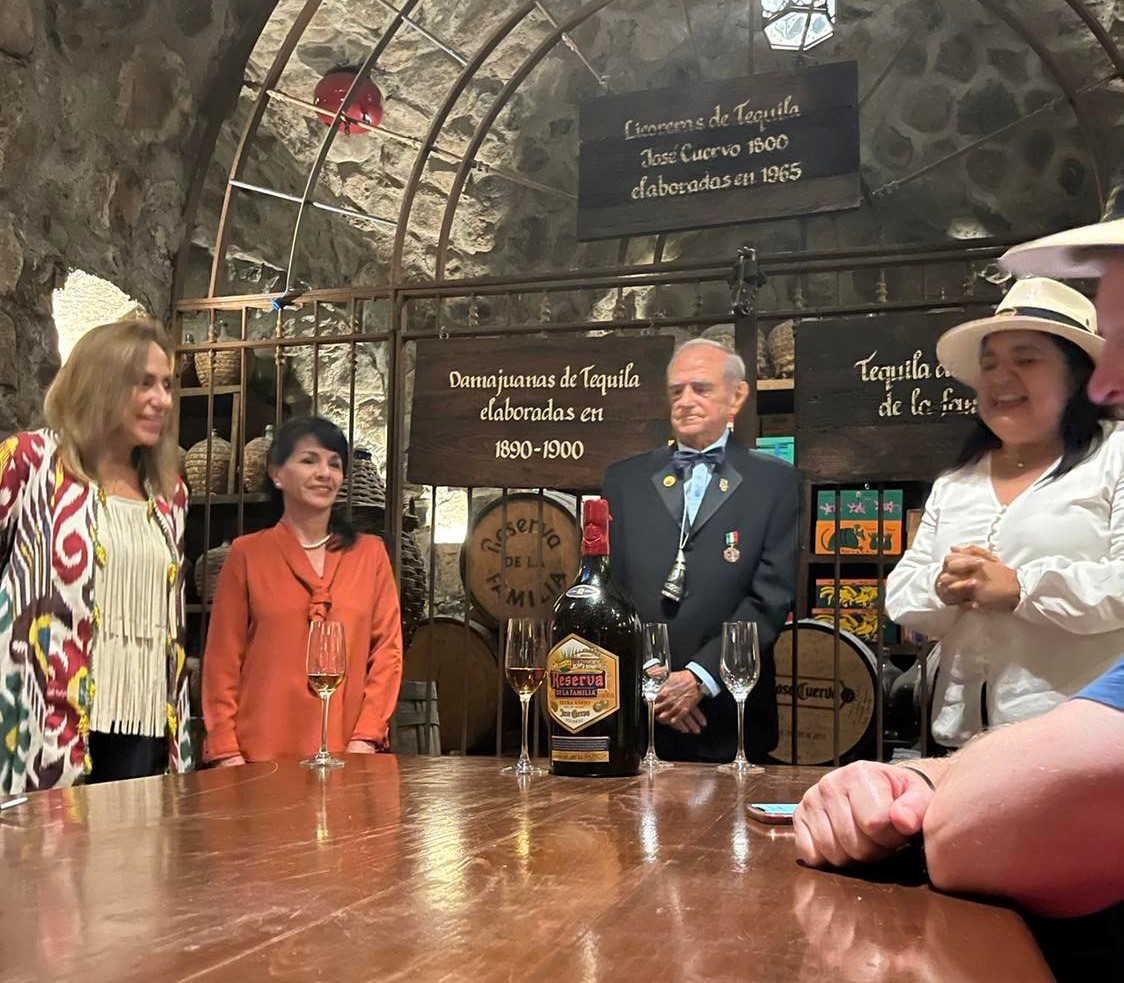 First conceived in 1995, Reserva Extra Añejo was originally released to celebrate Jose Cuervo’s 200th anniversary. The tequila is aged in oak barrels for around three years, then blended with over 30-year-aged tequila reserves held in this very basement.

If Jose Cuervo is best known for lime and salt tequila shots at college parties, then Reserva de la Familia represents the opposite side of the brand.

Using a nearly three-foot-long ladle, he popped the cork on a nearby barrel of Reserva and scooped each of us a glass of Extra Añejo. 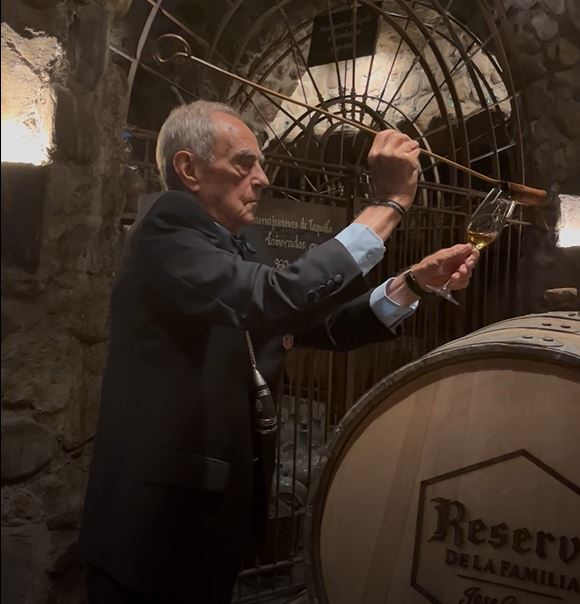 Pouring straight from the barrel.